Research on brain repair strategies has progressed exponentially over the last few decades.

Several studies in the fields of regenerative medicine, on one hand, and neural engineering, on the other hand, are tackling the brain repair issue by means of different, complementary approaches.

Biological approaches rely on the activation of the endogenous regenerative capacity of the brain and on cell transplantation.

However, none of the proposed paradigms has actually proved by itself sufficient to definitely heal functionally and/or anatomically a damaged brain. 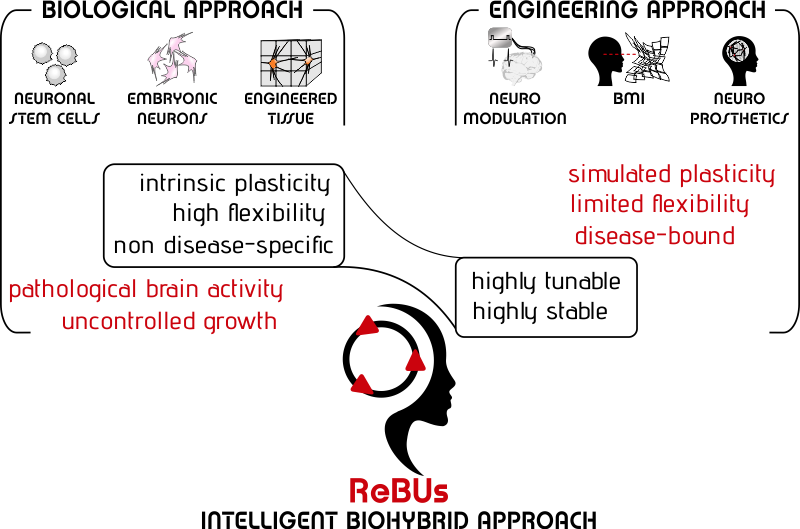 In order to overcome the limitations inherent to the sole use of biological or engineering strategies, Re.B.Us will exploit a novel intelligent biohybrid approach.

The ultimate goal is obtaining a biocompatible hybrid device of previously unexpected stability, capable of pursuing a self-healing process of dysfunctional neuronal circuits.

The biological approach to brain repair

The biological approach to functional brain repair relies on the use of neuronal stem cells, embryonic neurons or engineered nervous tissue to be implanted in the diseased brain in order to induce a ‘natural’ repair process of the damaged brain area.
The ideal graft neuronal network should be capable of task-related adaptation that would not rather evolve toward the (uncontrolled) generation of pathological activity. However, the use of biological grafts for brain repair is jeopardized by their unpredictable structure/dynamics features and plasticity. Moreover, fundamental studies on the long-term stability of the dynamics of graft neuronal networks are still scarce.

As it is hard to predict how the transplanted neuronal elements will dynamically evolve, it is to date impossible to predict the long-term impact of neural transplants on brain function.

Clearly, the intrinsic plasticity of biological grafts offers an exceptional degree of flexibility, but it might in turn endanger the patients’ safety, unless adequately fine-tuned.

However, these are far ambitious achievements.

In this scenario, tools from neural engineering & control theory complement the biological approach.

The engineering approach to restore brain function relies on the use of artificial devices that are capable of rectifying the pathological brain activity or of replacing the lost brain function.

Neuromodulation is under intensive clinical investigation for the treatment of neurological and psychiatric disorders (including epilepsy, Parkinson’s disease, essential tremor, migraine, depression, obsessive-compulsive disorder).
However, despite encouraging results, most of the currently implemented neuromodulation protocols rely on poorly flexible policies which are intrinsically incapable of dynamic self-evolving interaction with the patient’s brain because they are dictated by the human supervisor.
For example, stimulation may be delivered to a brain region with a fixed delay following the detection of electrical activity in the afferent area (so-called activity-dependent stimulation), i.e., stimulation is phase-locked to the ongoing brain activity.

Brain-Machine Interfaces (BMIs) have become an appealing reality since the Pioneering work by the research team of Nicolelis in the late ‘90s. Thanks to BMIs, a patient’s brain can interact with a machine, which takes over the duties of the impaired brain region and/or of the impaired limb.
Nonetheless, modern BMIs are mainly conceived to provide unidirectional replacement of the lost neuronal function with the consequent shortcoming of a rather stereotyped control.

Brain prostheses are artificial devices employed to reconnect disconnected brain areas (bridging) or replace a damaged one (replacement). Neuroprosthese are connected directly with the brain and rest within it.
Artificial neural networks (ANN) may be exploited within the brain prosthesis architecture. ANN are circuit board elements that are programmed to perform specific tasks as if it were a network of biological neurons and integrated into an implantable device. Of course, as opposed to their biological counterpart, ANN may only be endowed with simulated plasticity, but they cannot modify their physical structure as the result of the simulated plasticity phenomena.
Neuromorphic devices (i.e., engineered systems that mimic the complex parallel processing of the human brain) represent the latest advancement in the replacement neurotechnologies for brain repair. The (quite) recent implementation of memristors (memory resistors) and of organic electronic biomimetic neurons has opened more possibilities to this regard.

What are we still missing?

Clearly, biological grafts are intrinsically prone to endangering the patient's safety unless their behavior is adequately fine-tuned.
On the other hand, the seamless integration of engineered devices within the human brain is still limited by their poorly flexible design along with the inherent risk of foreign body reaction.

After decades of research, at the current state-of-the-art:

The major limitation in achieving full functional brain repair stems in the mismatched exploitation of the intrinsic advantages of available biological and engineering means:

Predicting the occurrence of pathological brain activity is at the core of intelligent algorithms needed to rectify the undesired brain electrical pattern. Moreover, in order to design a policy of intervention (e.g., electrical stimulation), it is required that the output response of the target brain area be predictable.
However, the inherent partial observability of brain function represents a major limiting factor. In fact, the activity of some but not of all neurons can be observed, making it very challenging to design accurate predictive algorithms and thus truly intelligent biohybrid systems.

Beyond the state of the art

Re.B.Us represents a paradigm overturn in conceiving functional brain repair strategies and it is specifically designed to achieve the realization of intelligent biohybrid neuronal grafts.

Re.B.Us is the first attempt ever to push forward a cross-disciplinary approach to repair disrupted neuronal circuits by means of an intelligent self-healing process that is not disease-specific in its design.

By virtue of its intrinsically adaptive behavior, the novel intelligent biohybrid system conceived in Re.B.Us will be at the core of further development of innovative neuroprostheses capable of bi-directional communication with the host CNS that would restore, by themselves, the function of a diseased brain, with no anatomical or pathophysiological boundaries.

Re.B.Us will push forward innovative machine learning techniques to build versatile adaptive neuromodulation algorithms that aid in the smooth assimilation of the neuronal graft into the diseased CNS.

The step beyond the state-of-the-art stems in the implementation of this methodology in high spatio-temporal resolution recording and intelligent multi-site stimulation using multi-electrode arrays (MEAs), which allows for micro-scale fine-tuning both of the neuronal graft and of the host brain area.

Contrary to previous work, stimulating electrodes are not randomly selected, but specifically activated by the intelligent stimulation algorithm according to real-time decision parameters.
The algorithm exhibits maximal flexibility by independently choosing site, timing and pattern of stimulation. 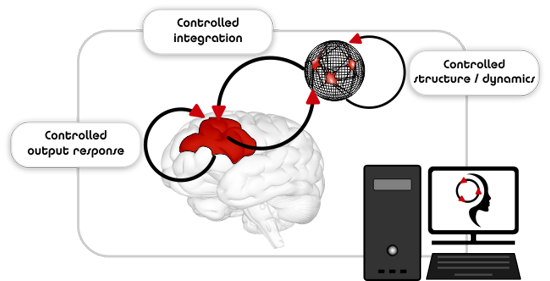 By establishing a functional partnership between a biological graft neuronal network and an intelligent controller, the dynamics of the graft will be fine-tuned by adaptive neuromodulation.
By virtue of this hybrid partnership, the biological component (i.e., real neurons) will provide for structural and functional plasticity, while the artificial counterpart (i.e., the engineered controller) will aid in the functional and anatomical integration of the graft neuronal network into the diseased host nervous tissue.
The output response of the diseased host may as well be rectified by an additional intelligent controller.

Re.B.Us is a two-year project funded by the under the

Disclaimer - The contents of this publication are the sole responsibility of Gabriella Panuccio and can in no way be taken to reflect the views of the European Union.